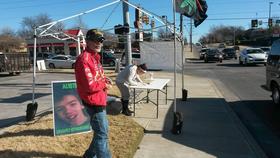 Organizers of a medical marijuana petition must turn in nearly 124,000 signatures no later than Tuesday if they want it on a state ballot next year.

Karla Gates with Green The Vote says right now, they have about 60,000 signatures.

"I don't know that we’re going to make our signature requirement, but we’re trying to remain hopeful as we go into the end of it," Gates said.

Gates said even though it appears they’ll fall short, she’s noticed a change in Oklahomans’ perceptions about marijuana, especially among senior citizens.

"They have access to the Internet, and they are doing research," Gates said. "They're the generation that’s also getting sick and that knows somebody that would benefit from medical marijuana."

Another problem has been having supporters who aren’t registered voters.

Green The Vote will bring back the petition next year if they aren’t successful this year.