Oklahoma Teachers, State Employees Walk Out Over Lack of Funding

Public schools from every corner of the state closed their doors today as teachers walked out of the classroom and marched at the Oklahoma capitol to protest years of cuts to education funding.

Last week, Governor Mary Fallin signed the first statewide tax increase in nearly 30 years to give teachers a roughly $6,100 raise. The nearly $450 million deal increased taxes on cigarettes, fuel and oil and gas production in hopes of heading off the teacher walkout.

Shortly before she signed the funding bills, Fallin said she hoped teachers rallying at the capitol would thank lawmakers and go back to the classrooms.

But most teachers at the march said the pay raise package was a small step after years of funding neglect and they want lawmakers to do more.

Christine Wertz from Bixby North Intermediate was at the Capitol to speak with her representatives. She said better wages would keep some teachers from quitting.

"They won’t be fleeing the state, but it will still be hard to keep quality teachers if our environment is challenging with large class sizes."

Outside, teachers and supporters packed the parking lot, the sidewalk and the grassy spaces in the shadow of the capitol dome. Jennifer Jarnagan-Riem, a 7th grade math teacher from Glenpool, said the raises were a great start.

"It was a stepping stone. And now we’re ready for step two. We need proper funding, we need adequate funding and we need a long-term plan. It’s not something that’s just going to happen in a day."

Between 800 and 1,000 employees of state agencies were also at the state capitol today to ask for support from state legislators. The absences didn’t result in any agency closures, but they say they’re standing in solidarity with teachers because the current funding levels aren’t acceptable or sustainable.

The effects of the teacher walkout were felt in communities across the state.

John Durkee from KWGS talked to Cindi Hemm, the superintendent of schools in the tiny town of Avant, which is about an hour north of Tulsa. The school closed for the walkout, and Hemm was nervous.

While she sides with her teachers, on the ballot tomorrow in Avant is a $450,000 school bond question. She doesn’t want the towns’ people to think the district is greedy, but...

"We actually have a portion of our building all along our east side that’s falling into our basement."

Her husband, Jeff, is the school’s coach. He is also one of Avant’s two bus drivers. Even though school was out of session today, he still drove his bus route.

"Our school is 100 percent free lunch and free breakfast. So we’re worried about our children getting meals. So I will run the route in my car at lunch time and go to the bus stop and honk and they’ll come get their sack lunches."

Claire Donnelly with KGOU visited a Boys and Girls Club in Midwest City, which opened a daycare program during the walkout even though it’s normally only available after school. She talked to 8-year-old Jimmie Avery, who was eating lunch and playing with about 25 other kids. Avery knew he was out of school because of the walkout.

"It’s kinda cool but it’s kinda not. Because, like, it keeps happening for some amount of days, they will start adding on the days for our summertime."

Lawmakers didn’t take any action towards increasing funding for education Monday. But Republican House member Roger Ford said he’s interested in increasing the income tax in the future and putting that money toward the classroom.

"Yes, if it supports education and core services. Not if it builds more state agencies."

Many school districts have already called off classes for Tuesday and will continue to send teachers to rally at the capitol.

A Republican lawmaker from Bartlesville says he had good conversations with educators during the first day of a teacher walkout. State Representative Earl Sears says teachers were largely supportive of a six-thousand dollar teacher pay raise that was signed by the governor last week, and educators are now asking for an increase in classroom funding.

To do that, Sears says lawmakers will need to cap credits to the wind industry, repeal parts of the capital gains exemption tax , implement an online sales tax, and legalize ball and dice gaming at casinos.

"All of those, if you would pass those, that would fill the hole, then you would have excess and you could put money into the classroom. That’s a possibility, but I’m getting way ahead of myself because we haven’t passed any of these bills yet."

Thousands of teachers gathered at the state capitol Monday, and districts across the state cancelled classes for the demonstration. Some districts, including Oklahoma City, Edmond and Norman have already shut down classes for Tuesday as well. 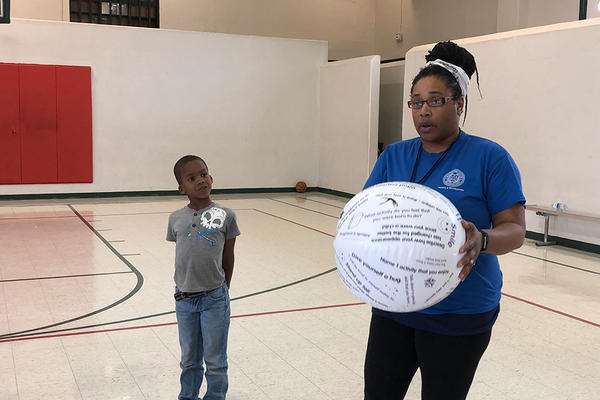 As Oklahoma teachers walk out of their classrooms this week, some parents are looking childcare options. KOSU's Kateleigh Mills visited one Oklahoma City recreation center helping to fill the gap.

Linda Gathers is one of the employees at the Douglass Recreation Center in Oklahoma City. She says they are prepared to feed children for five days.

“We want to make sure the children get fed, even if they are in or out of school. We never know what kind of situation they’re having at home. This could be the only meal that they get.”

Supervisor Naisha Morris says parents who may not be able to pay for extra or extended child care are thankful it's an option. She says she anticipates more children at the center as the walkout continues.

StateImpact's Quinton Chandler rode around today with Oklahoma City Police Sgt. Jeff Crawford, a school resource officer who normally works out of Douglas Mid-High School. While schools are empty due to the teacher walkout, cops assigned to city schools are still on the job.

Police officials say if teachers continue protesting through the week, cops like Crawford are prepared to keep making these rounds to make sure schools and community centers catering to kids are safe.

Schools across the state shut down today. Many will remain closed tomorrow, including Oklahoma City and Norman. 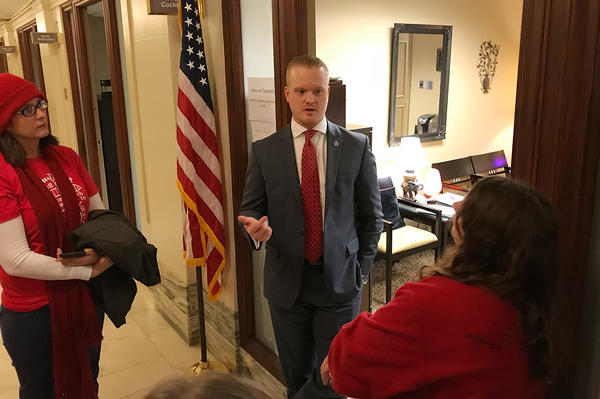 The Oklahoma Public Media Exchange's Jacob McCleland talked with Rep. Josh Cockroft (R-Wanette) about what he's hearing from teachers in his district and what the next step is for legislators.

Cockroft says there are also funding problems in transportation and public safety. With last week's revenue package, he believes things are moving in the right direction to fix some of those problems.

The Oklahoma Public Media Exchange's Jacob McCleland talked with Lacy Graalfs, a teacher at Hulbert Elementary in eastern Oklahoma. She says there's not enough books for everyone in her child's class.

StateImpact Oklahoma's Emily Wendler talked with Bixby K-1 reading specialist Molly Damer, who is in her 20th year as a teacher. She says teachers don't have the funding or materials to education students.

Damer says teachers are keeping track of which legislators support education and which do not.

Christine Wertz, a fourth grade teacher at Bixby North Intermediate, says she's grateful for the teacher raise passed last week, but teacher retention will be tough if the teaching environment is challenging with large class sizes.

NPR education reporter Anya Kamenetz talked with several Oklahoma teachers about why they're walking out of their classrooms today.

Tulsa English teacher Larry Cagle is one of the leaders of a grassroots organizing group, Oklahoma Teachers United. He says the $6,000 raise passed by the state legislature last week isn't enough.

Cagle says if his group doesn't get what they want, they'll protest into the summer or longer.

Franco says his school runs out of paper frequently and he wants to give his students more opportunity than they have now.

StateImpact Oklahoma's Emily Wendler talked with The Takeaway this morning about the teacher walkout and what led us to this point. Hear the conversation below.

The Oklahoma Public Media Exchange's Jacob McCleland talked this morning with Chelsea Cruse, an AP government and history teacher at Woodward High School, about why she's walking out today.

Cruse says she's concerned about education funding and says her students aren't getting what they deserve.

The crowd is marching to “We’re Not Going to Take it” by Twisted Sister. pic.twitter.com/atu9ZQApA1— Sierra Rains (@sierramrains) April 2, 2018

Thousands of teachers and public employees from across the state are expected to flood the Capitol today, rallying for increased pay and more funding.

"What we really need to focus on is, our students have lost classes like fine arts, and foreign language, advanced placement classes. Every school district in this state has had to cut classes."

Priest did not give a specific amount of classroom funding that teachers are fighting for. But she says they will keep showing up at the Capitol until lawmakers restore a portion of the $200 million that’s been cut from school budgets over the past decade.

The $450 million tax package passed by the Oklahoma legislature last week was designed to fund pay raises for teachers, school support staff, and state employees. But, just days after lawmakers applauded themselves for passing those bills, they repealed part of the package - a $5 tax on hotels and motels - and cut out about $50 million in revenue.

"They’ve passed these bills, but they’ve already removed the funding for them. So, it’s like, I’m wary of something that’s not funded."

Thompson says teachers need to know that lawmakers aren’t going to renege on their pay raise and their promise to boost school funding over the next few years.