Among the great joys of hosting The Weekend Blues is the opportunity I have to talk to so many incredible musicians. On September 19th I had the pleasure of doing just that with the “Soul Queen Of New Orleans.” If that wasn’t enough, Irma Thomas took a second phone call from me on October 13th to share with us how things were going in the early days of her package tour with the Blind Boys Of Alabama and the Preservation Hall Legacy Quintet.

Here are some of the highlights of those two brief conversations:

On her early beginnings

Jim Johnson: When I talk to people who have such distinct and tremendous voices I like to ask when and how that person discovered their voice... And when you knew you had something in it that was all your own.

Irma Thomas: When people start paying me to hear it! (laughs) That's the honest to goodness truth, because I've always sung. It was just part of what we did as a family. I'm an only child, but I grew up with a bunch of cousins and we did that for self-entertainment. And it happened in schools. And you know it was a part of church. So, you know, I didn't find my voice to be anything different than anybody else, because everybody I knew around me we all sang and I had no knowledge of what was good what was bad. I mean the voice was the voice as far as I was concerned growing up.

Johnson: Well, you got started in life in many ways very early [Irma was twice married and a mother before the age of 19].

Johnson: And I've heard a little bit about some of your earliest experiences, including twice being fired for doing what you're known for doing these days… and all these years. Can you just briefly elaborate on that? And then I'd be interested in hearing about some of the people who actually did recognize what you had to offer and perhaps served as primary examples for you either personally, or professionally.

Thomas: Well, as you said I did get fired for singing on the job. That's why I have a very strong faith, because I didn't realize at the time that I was being guided into something that was going to benefit me in later years. For the balance of my life up to now and that is to sing to support my family. But, the first time I was at a restaurant washing dishes, and I mean what in the world could I do to disturb anybody by washing dishes... singing just to keep myself company from 7 to 11 p.m. The same situation happened again in a nightclub where I was a waitress. I got fired for wanting to sing and entertain the folk who I was serving tables to. Fortunately, the club situation is where the person who recognized that I had something special (Tommy Ridgley) took me to an audition… and from there, the rest became history.

On being dubbed “The Soul Queen Of New Orleans”

Johnson:  You have been sporting the crown of Soul Queen of New Orleans, and I'm wondering…

Thomas: Since 1989. It became official in 1989. Prior to that, my drummer who's now deceased,  Wilbert Widow, when he started working with me in the band that I put with that my husband and I put together back in the late 1970’s and early 80’s. He said he didn't want to introduce me as a singing grandmother. So he gave me the title of the “Soul Queen in New Orleans” and he just… That's the way he's introduced me. But then in 1989 a young man who was working for - I think he was working for the Jazz and Heritage Foundation at that time - decided that it would be fitting to just give me that title, officially. So in that year… February 17th to be exact - I can remember that because it was the same day my father passed away. So it's kind of it is going to always be right for me to remember - they officially gave me the title of the “Soul Queen of New Orleans” officially since 1989.

Johnson: Yeah, and I think rightly so. But with that moniker comes an inherent mix of pressure and privilege...

Johnson: Well, let's talk about this other name… your birth name and its connection to a hurricane that just passed through.

Thomas: Boy have I been teased. Oh goodness. Good thing I have a sense of humor. (Laughs)

Johnson: Teasing and humor aside, you lived through Hurricane Katrina, one of the most devastating storms to ever hit the states here. And I'm wondering what were you thinking as first Harvey, then Irma began to make the news. Were there flashbacks? Is there such thing as hurricane PTSD that you and your fellow…

Thomas: I didn't I haven't had any so-called flashbacks, but the memories will always be there. I guess I can say that I was fortunate in one way and not so fortunate in another. I left town the Friday of the weekend of Katrina. I had the one and only job in August booked in Austin Texas. So, I did not experience the actual flooding per se in New Orleans. I was somewhere else when the flooding happened and I thank my God today, and many times over, that I was not here, because I probably would have either drowned or been sitting on the top of the roof. I'm glad I wasn't here because I probably would have caused the death of family members by being stubborn and not leaving, because we never left New Orleans in terms of when a storm came through. We would just hunker down and ride it out. So, I feel very blessed in that I was not here. I got the news while in Austin, Texas while we were doing the actual show, you know when we went on break. And then the levees breached at a point at the 17th Street Canal the levees breached early that morning. That's why a lot of folks lost their lives because people had gone to bed and was comfortable relaxing after the storm had passed. So they went back to bed and sleep. So a lot of them got caught off guard. And my brother in law was one of them who got caught. He heard the solution around. He woke up, and when he woke up, the water was up level with his bed. And he had to swim from his apartment to the bridge to get out of the water. So, a lot of folks got caught off guard and I was blessed in one way I guess. It's a mixed blessing because I was not in the city at the time the levees breached. I woke up at the hotel (in Austin, Tx.) since we couldn't get back to the city. I woke up at the hotel watching the news on CNN and they were talking about the levees breaching and showing the homes… and how high the water was. I actually saw the roof of my home, which is a very unsettling situation to look at. It's like you have all these emotions run through you and you're like, ‘OK what are we going to do?’ But, I never gave up on coming back home because I knew the water wasn't going to stay. That much I had faith in… But, I never felt hopeless. I didn't ever get to that point. I shed my tears and I got beyond it. I prayed on it which most of us with faith do. And I got the strength that I needed to do what I needed to do. And that's how I handled it, because … there's nothing you can do about the weather. There's absolutely nothing you can do about the weather. That's the first thing I'd advise people. You can't change the weather. So, all you have to do is get the strength to deal with whatever is going to happen. Figure out how you are gonna handle what it is that's happening to you at that point and move forward, if you can.

On sharing the bill with the Blind Boys of Alabama and the Preservation Hall Legacy Jazz Quintet.

Thomas: Turns out that I work with most of the guys that are in the (Preservation Hall) Legacy band. And, of course, the Blind Boys of Alabama… they’re good. They've been at it a long time, so they know what they’re doing. And the show has been going relatively well.

Johnson: I’m thrilled to hear that.

Thomas: Well, it has to get better. (Laughs) We've been singing the same songs every night since September twenty-ninth, so we know what we’re doing.

[Irma Thomas shares the stage with the Blind Boys of Alabama and the Preservation Hall Legacy Quintet at the Tower Theatre in Oklahoma City on Wednesday, October 18th from 7:30 p.m. to 11 p.m.] 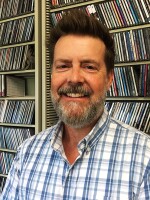