Summer Boismier had posted a QR code in her classroom that pointed students toward a resource from the Brooklyn Public Library in New York that provides digital access to its collection — particularly books that may be banned elsewhere.

“I saw this as an opportunity for my kids who were seeing their stories hidden to skirt that directive,” Boismier told Gothamist, a news website operated by New York Public Radio station WNYC. “Nowhere in my directives did it say we can’t put a QR code on a wall.”

The incident is the latest fallout from House Bill 1775, Oklahoma’s so-called critical race theory ban, which was designed by lawmakers to limit teaching controversial topics in the classroom and restrict how issues like systemic racism and gender identity can be discussed in schools.

The bill makes no mention of the term. Gov. Kevin Stitt has incorrectly claimed Oklahoma was the first state to ban the teaching of critical race theory in the classroom.

Reached by phone Tuesday, Brooklyn Public Library President and CEO Linda Johnson said the news out of Norman made her feel “sick.”

Johnson said the Books Unbanned program had provided access to materials for roughly 4,000 young people across the country who have accessed about 16,000 books.

“On one hand, we're heartened by the fact that we've been able to put material in the hands of people who need it,” Johnson said. “The emails are very poignant. They talk about being isolated and not being able to read about issues that are important to them and that they're struggling with. On the other hand, the fact that the need exists is really dispiriting.”

Johnson said this is not the first negative reaction to the BPL program, but “what's happening in Norman seems to be broader and more systematic than what's happened elsewhere.” Johnson said Tuesday the library was attempting to reach Boismier.

“My first reaction was, 'Let's hire that teacher,' because we are always looking for smart, courageous people to work in our system,” Johnson said.

In a statement, Norman Public Schools spokesperson Wes Moody said the teacher misrepresented the circumstances of her departure by saying she had been placed on leave for posting the QR code.

“The concern centered on a Norman Public Schools teacher who, during class time, made personal, political statements and used their classroom to make a political display expressing those opinions,” Moody said.

“Like many educators, the teacher has concerns regarding censorship and book removal by the Oklahoma state legislature,” the statement continued. “However, as educators it is our goal to teach students to think critically, not to tell them what to think. We addressed the issue and expected the teacher to return to class as normal Wednesday. At no point was the teacher ever terminated, suspended or placed on administrative leave but, unfortunately, we understand the teacher has publicly expressed their intent to resign.”

Robby Korth
Robby Korth grew up in Ardmore, Oklahoma and Fayetteville, Arkansas, and graduated from the University of Nebraska with a journalism degree.
See stories by Robby Korth 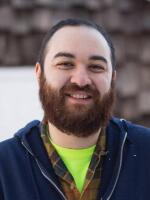