The Haunting of Kendall's Restaurant

Kendall’s Restaurant has been a fixture of downtown Noble, Oklahoma, since the mid 1980s, and for most of its existence, Kim Lock and Dee Downer have been co-owners. The place is well known for its comfort food menu – including massive chicken fried steaks and wonderfully fresh cinnamon rolls. When I visited, Kim took me on a tour of the place, starting with a room she referred to as “the kids’ room” because it used to have toys in it: “When we first began to really discover that we had something here, we had an area over here that had toys, and you would come in in the morning and the toys would be all over the floor”. The staff were supposed to take the toys away each night to be run through the dishwasher and then returned in an orderly manner. “I thought they were not doing that until one night when I left, our alarm went off. I came back and I had closed up, I had turned all the lights off, I had cleared everything up. I returned. All the lights were on in the entire building and when I came back here, the toys were everywhere. Since then, when we have had OKPRI, this is the room they get the most activity out of". (OKPRI stands for Oklahoma Paranormal Research and Investigations and I'll return to them below.)

Kendall’s is located on the sites of what used to be several different businesses, including the Stufflebean grocery store, a funeral home, and some stables. After showing me around the restaurant, Kim and I sat down to chat. I commented to her that I found the idea of ghosts being around me scary, but she didn’t feel the same. Instead she said she felt protected by them and went on to explain: “About a year ago I was in here by myself and I had the food in the oven. I remembered I had forgotten something at the store. While I was at the store, I realized I had left the food in the oven and there was no possible way it wasn’t going to burn up. I just was sick. The whole way home I’m thinking ‘what am I going to do? I’m going to have to redo this. I don’t have time’. I walk in and the oven doors are both standing wide open and the food is fine. Someone had opened the oven doors which are extremely heavy, they’re commercial ovens. There was no one in the building except me so I just said ‘thank you very much’. It was an absolute gift and so Dee and I often say that they help me and they don’t help him.

Of course, I asked Dee to tell me more and he described an incident which had taken place on the same day that Kim’s baking had been saved: “I was getting brewed iced tea started. Moved an urn over, started another one. Went off. Came back in, and both of the spouts were open and it was just pouring on the floor. And I’m like ‘well it’s nice that they’re helping you but they’re making my life hard. Golly'. But after things like that, you’re just like ‘well we’re here with other things going on’”.

Dee and Kim are by no means the only ones to have experienced odd goings-on at the restaurant. I learned more when I spoke with Peyton Allen and Michelle Goad.

Peyton worked at Kendall’s for around five years: “There’s a couple of times whenever I was closing that I would be sweeping. Back then we would have silverware already set in our little packages; I would set all of those out after I was done sweeping, and there was one time when I was going to dump my dirty pan and I came back and there were about three or four tables where the silverware had completely flown off the table. There would be a lot of times when I would hear my name being called. They would also like dump the pepper. Just goofy things. The only one that I’ve experienced in front of you would be like when they tug your hair or the back of your shirt. That’s why I think one of them has to be a kiddo because they’re trying to get your attention, you know, but they’re short so that’s where they would tug.”

Meanwhile, Michelle was a childhood friend of one of Kim’s daughters and they often used to play together in the aforementioned kids’ room: “I saw a man. I kept hearing him over and over just kind of counting, quietly. And there was a lady that I saw walking through towards the kitchen area and she was dressed all in black and she didn’t look like a regular person. In a way she was almost see-through. But she was just walking through the kitchen area. And I knew she wasn’t supposed to be there. I had mentioned it and everyone ignored it.”

It wasn’t until many years later that Michelle came to understand that the old man and the woman in black she saw as a child were ghosts. That she did so was down to the work of Oklahoma Paranormal Research and Investigations (OKPRI). Christy Clark Powell is its founder and director. She told me that her team have investigated hundreds of places, in many of which, they find no paranormal activity at all. OKPRI’s historian, Kathryn Wickham, concurred: “We try to disprove first. We have devices that measure if there are electrical problems in the building. We came in with our equipment and an open mind and just spent time in each of the rooms, recorded some audio, and documented our personal experiences.”

At Kendall’s, they were definitely able to detect activity that interested them. Christy told me "Our audio recorders were actually able to pick several EVPs which stands for Electronic Voice Phenomena or voices of the dead. We had a couple of our members who were touched physically, and just kind of that creepy feeling of being watched when no one else was around. So we do feel that there is something going on at Kendall’s that cannot be explained by logical explanation.”

Christy is a medium and told me that she also encountered some distinct figures which recalled those already described here by Michelle Goad and Peyton Allen: “One of them was the banker. He was in a pinstripe suit and had this little Derby hat. His name was Theodore. And he was asking me about this bank. ‘Where’s the bank?’ And I told him I didn’t know and then he disappeared. I do believe with him that he was the owner of the bank across the street. There is a little girl that is seen there. She followed us around a lot and didn’t say a whole lot about herself. Wanted to play. We would catch her giggling. And there was a woman. She had told me her name was Margaret. She was dressed all in black, and she was very pale, dark eyed. Sometimes when I see spirits, I’ll also see little visions of their life and there was some sort of rejection that happened and I seen her very upset and I seen her weeping. Afterwards I seen her collect oleander leaves and put them together in her food and consumed that which led to her death.”

For my own part, I don’t consider myself a skeptic or a believer. I simply don’t think much about the paranormal. But I had definitely become intrigued by this stage. Why, I asked Christy, did she think spirits would stick around? She responded “I do believe everyone is given the chance to cross over. There are some who choose not to and those are the ones that we call earth-bound spirits. Maybe they were religious and they’ve been taught about a fiery hell all their lives so they’re scared. Or maybe it’s because they still have loved ones here who are mourning them and they feel like they’re needed. Or maybe they died tragically and they’re confused. They still feel like they are here physically in this form. There’s just a variety of reasons why they’re here.”

This is a subject that Kim Lock has also thought about: “I’ve prayed and we’ve had ceremonies that if there is release for them to leave. I assume that they like it. I assume that they’re attached to this building. I don't know. Who knows? I may stay whenever I go. I believe personally and in this restaurant that we honour and respect life from past and present. I don't know about you but I’ve lost a lot of people that I loved, and I don't know that they’re walking around here although they may be, but I do know that there is connection to whatever happens after this, and that is comforting. That is beyond comforting. I’m going to respect them and be grateful that I get to share their space".

How Curious is a production of KGOU Public Radio. It is produced by Rachel Hopkin. The editor is Logan Layden and David Graey composed the theme music. If you have an Oklahoma-related question, email curious@kgou.org. Subscribe to the How Curious podcast on your favorite podcast app.

As a community-supported news organization, KGOU relies on contributions from readers and listeners to fulfill its mission of public service to Oklahoma and beyond. Donate online, or by contacting our Membership department. 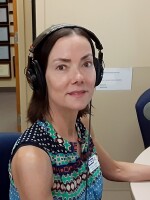 Rachel Hopkin
Rachel is a British-born and U.S.-based radio producer and folklorist with a passion for sound and storytelling. At KGOU, she is host and producer of the How Curious podcast and various special projects.
See stories by Rachel Hopkin
Heard on KGOU